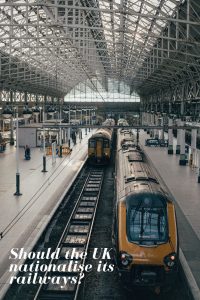 Should the UK nationalise its railways? Well regardless of personal opinions, it’s time to start seriously considering the implications that this may have on the industry.

On 22 September 2018, Shadow Chancellor John McDonnell claimed that the British rail industry could be completely nationalised within five years if Labour were to win the next election. Despite the many ifs and buts, below we explore the likelihood of nationalisation and the possible implications for the sector.

The first thing to consider, and the biggest ‘if’, is whether or not Labour are likely to win the next election. The million-dollar question! Maybe we will end up with another coalition…. Who knows. I’m not going to bore you with political jargon or personal opinions but the headline story coming from the 2017 general election was that the Conservative’s strategy of calling an election to strengthen their majority backfired. They lost their parliamentary majority and had to form a deal with the DUP before they were able to form a new government.

The big winners on the day were undoubtedly the Labour party. Despite many negative news stories about Jeremy Corbin in the build-up, he led Labour to a 32 seat increase from the previous election, while 13 Conservative seats were lost. After the election, the Conservative party held 318 seats compared to the Labour’s 262 seats with 326 seats being the magic number required to hold a parliamentary majority. So, while Labour were 64 seats short of achieving a parliamentary majority, and were 56 seats behind the Conservative party, is there a chance of them getting into power in the next election? In short, who knows. With the surprising Labour success in the last election, ongoing Brexit negotiations and the very real possibility of a ‘no deal Brexit’, it’s certainly something we should not discount.

Management of the rail network is currently split between the network (tracks, stations, signalling etc.) and train operations. Since the break-up of British Rail in the 1990s, Network Rail (a government-controlled agency) have run the network, while trains have been franchised out to 25 privately owned organisations.

Experts remain divided over whether the rail industry would benefit from being fully integrated again, largely due to historic failures which were a major factor behind privatisation in the 90s.

Following the Second World War, the rail network was in desperate need of investment after being exhausted by supporting war efforts and bearing bomb damage. Safety on the lines had become a major concern and the capital outlay required was far in excess of what rail companies at the time could afford. As a result, the entire rail industry was nationalised in 1948. 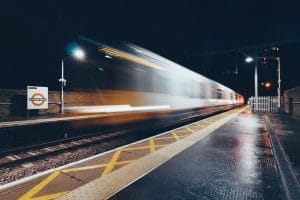 Investment in the new rail network focused on replacing what was already there instead of considering the future demands and as a result, large losses were being recognised by the late 1950s and cost cutting commenced. These roots of under-investment laid the foundations for the current era of part franchised-ownership, yet there are still parts of the British network under severe strain from increasing passenger numbers. Significant improvements have been made in recent years, due to Network Rail’s 5 year, £38bn investment plan which ends in 2019, but there will always be the looming question of what is enough to satisfy the quest for a modernised, efficient rail network.

Historical events imply that re-nationalisation isn’t the best strategy for the industry going forwards however, in reality, are the same mistakes likely to be repeated? Looking at ongoing work, this appears not to be the case with significant investment in ground-breaking new ventures such as HS2 rather than solely repairing current lines. It could be argued that the divide between the trains and network contributes to a better overall rail industry with one being primarily customer focused and the other solely on infrastructure. The industry does appear to benefit from this divide but whether this is it the best use of available funds is another question.

Franchises lead to dividend seepage of roughly £0.7bn a year and on the whole, are profitable organisations. If the funds were all government controlled, there may be greater scope for re-investment however this comes at the expense of losing the clear divide in interests between investment in infrastructure and customer satisfaction. Both systems appear like they could work with sufficient organisation and management, but a clear divide in responsibilities and interests seems imperative to maintain an efficient network.

Has anyone ever said they ‘don’t do politics’?

Tweets by BB_Price_Ltd
We use cookies to ensure that we give you the best experience on our website. If you continue to use this site we will assume that you are happy with it.OkPrivacy Statement